Loko beat Lietkabelis and reach Top 16 of the EuroCup

November 18, 21:12
The Red-Greens beat the Lithuanian rival and guaranteed themselves a place in the Top 16 of the Eurocup.

Paulius Valinskas opened the scoring in the match and Loko’s first attacks did not even reach a throw, but on the third attempt Mindaugas Kuzminskas still opened the score to Loko’s points. And already in the next possesion Stanislav Ilnitskiy scored three points. The team began to play with pleasure – Kalnietis and Kuzminskas organized a spectacular alley-oop from the board. Effectively!

Loko quickly got ahead of the rival by more than ten points. It should be noted that Lietkabelis played in this match without their key players Marin Maric and Gytis Masiulis. It was generally the first match of the Lithuanians in the three weeks they spent in quarantine. Let’s mark six points of Reggie Lynch in the first quarter. Kyle Vinales stopped the Loko run a little, but Grigory Motovilov threw in a three-pointer buzzer with a siren and the rivals left for the first break in the match with the score 29:18. 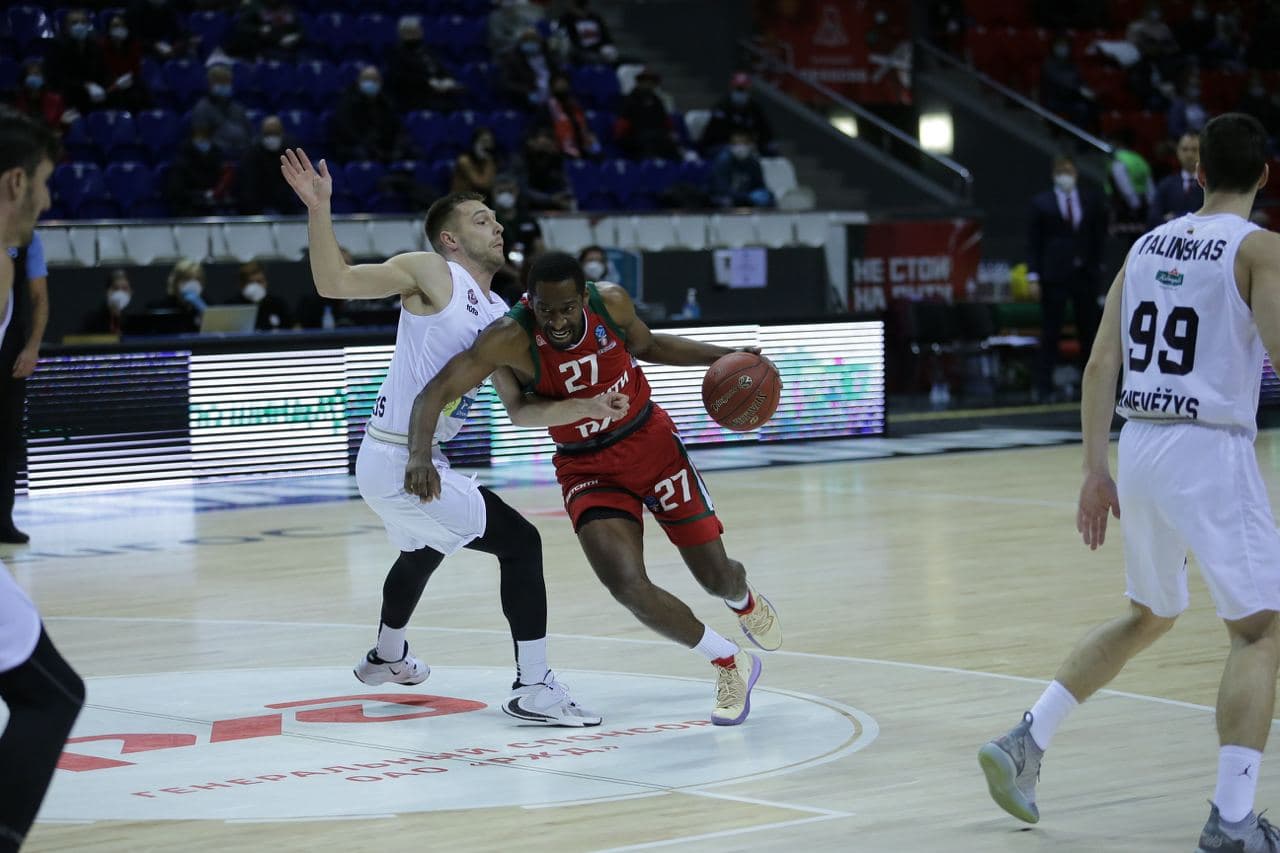 The tone of the game was set by Ivan Paunic’s spectacular alley-oop across the entire court on Kevin Hervey. After this hit the difference increased to fifteen points and the guest coach Nenad Canak took a time-out to revive his players. But the course of the match, like the difference, did not change. Jordan Crawford scored two three-pointers in a row and then converted a fast break after an steal. Sometimes the Red-Greens flirted and wanted to play too brightly for the fans, but when the opponent is in this state, then one can find a place for non-standard solutions. Without losing concentration, of course. The first half ended with a score of 52:38. The Red-Greens converted 70% of their three-pointers before the half time – 7 out of 10.

An equal fight with a comfortable margin

The second half began with another leap from Loko, but the guests tried not to let go of the Red-Greens. The guests imposed a struggle and thanks to the good play of Margiris Normantas and Paulius Valinskas they even managed to win the third quarter. Loko has lost the desire to perform feats, which is quite logical in such a tight schedule of games. Pragmatism sometimes comes to the fore. Before the decisive quarter, the Red-Greens were leading with a score of 72:62. A spectacular combination in the ending was played by Paunic and Lynch, who ended the attack with a powerful dunk. 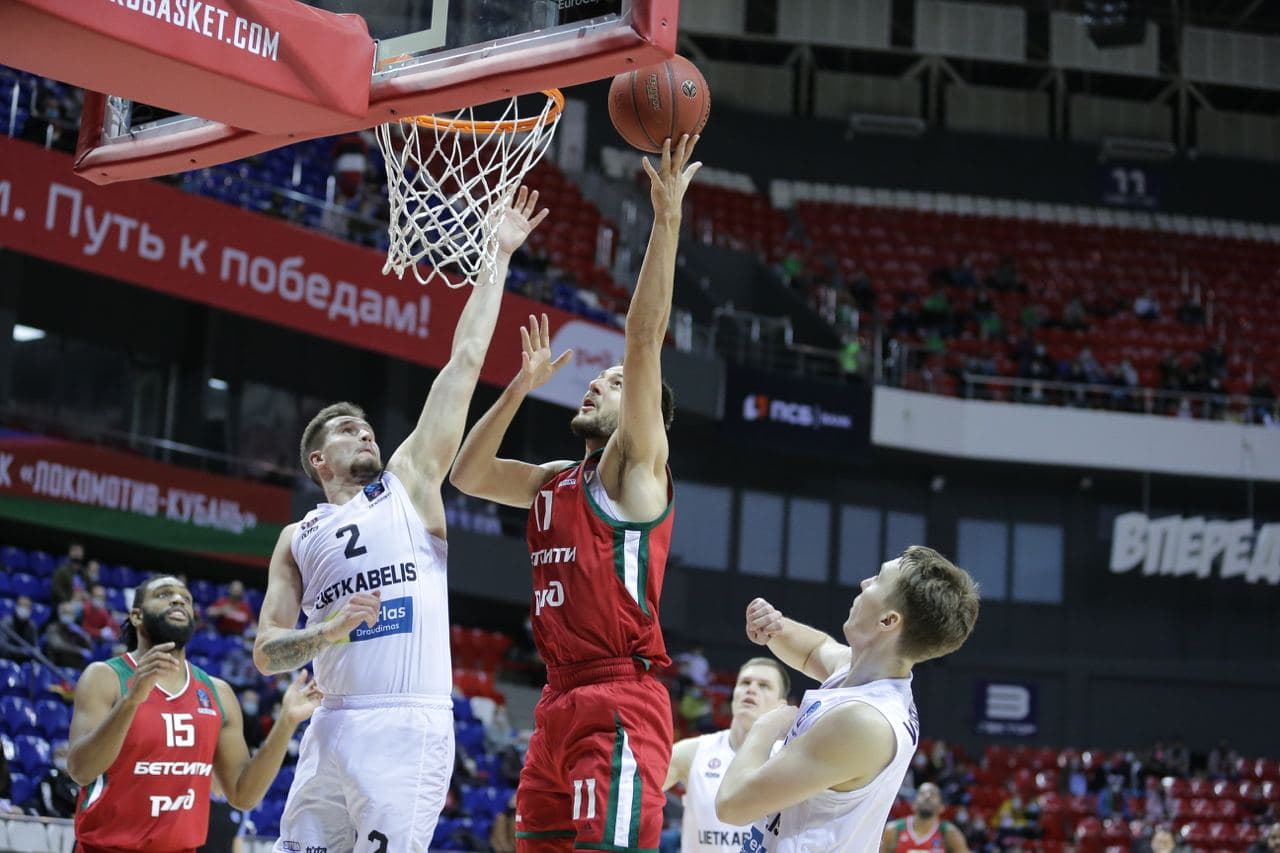 Resistance until the last seconds

The fourth quarter began with a miss by Alan Williams, who was unlike himself that evening. The Lithuanians added energy and after three consecutive offensive rebounds scored and one, reducing the difference to seven points! There was a smell of roast in the Basket Hall. Vinales responded to the three-pointer of the Loko captain with his long-range throw. In the next attack Kuzminskas scored three points – a real shootout began. The hosts quickly realized that the jokes with Letkabelis were bad and got together, returning the difference of fifteen points. Kuzminskas played a good match, who reached twenty points already in the middle of the fourth quarter. Mantas Kalnietis again returned to the norm in assists – 11 per game. Loko captain Stanislav Ilnitskiy has set a personal career record at Loko in terms of performance – 13 points.

On the court, one and a half minutes before the end of the quarter, serious passions began to boil – Normantas scored his third three-pointer in the match and reduced the difference to two possessions. The Lietkabelis players played to the last, but the Red-Greens missed the rhythm a little. Evgeny Pashutin took a time-out, which allowed him to bring the match to victory – 94:90.